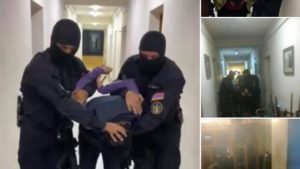 Six citizens have been detained on suspicion of organizing mass riots, public calls to seize power and overthrow the constitutional order, Chief of Staff of the Prime Minister’s Office Eduard Aghajanyan informs.

Two of the most active participants of the attack on National Assembly Speaker Ararat Mirzoyan are among the detainees.

All criminals will be punished according to the law.