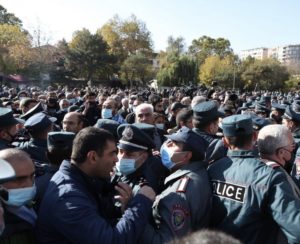 The Police have detained several participants of the opposition rally at the Freedom Square in Yerevan.

The protests are triggered by the signing of a Russian-brokered statement to end the war in Nagorno Karabakh.

Before the signing of the statement, 17 opposition parties had issued a joint statement calling for Prime Minister Nikol Pashinian’s resignation.

The Police require to end the rally, noting that the organization of demonstrations is prohibited under the martial law still in place in the county.

The Police notify that it will take coercive measures prescribed by law in case of disobedience.

The joint statement envisages the handing over of three regions to Azerbaijan.

Peacekeeping troops of the Russian Federation are being deployed along the line of contact in Nagorno-Karabakh and along the Lachin corridor linking the Republic of Artsakh to Armenia.

The Parties have agreed that a plan for the construction of a new route along the Lachin corridor shall be determined within the next three years, providing communication between Nagorno-Karabakh and Armenia, with the subsequent redeployment of Russian peacekeeping troops to protect this route.

The Republic of Azerbaijan shall guarantee traffic safety for citizens, vehicles, and goods in both directions along the Lachin corridor.

All economic and transport links in the region shall be unblocked.