Azeri troops trying to annoy Karabakh residents out of their homes 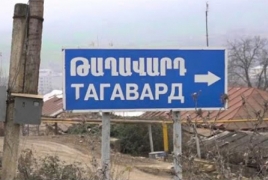 The Azerbaijani military has been loudly playing mugham pieces for three days now, as well as threatening through loudspeakers, thus trying to make the residents of the Armenian village of Taghavard leave their homes in Nagorno-Karabakh (Artsakh).

According to Rudik Baghdasaryan, a local official, the villagers are getting used to the “unpleasant” music and trying to live as best they can.

“Now they have come up with something new: they say ‘abandon the village if you don’t want to suffer the same fate as Parukh’,” Pastinfo cited Baghdasaryan as saying on Tuesday, March 29.

The official said students go to school per usual, and there is no growing tension among the population.