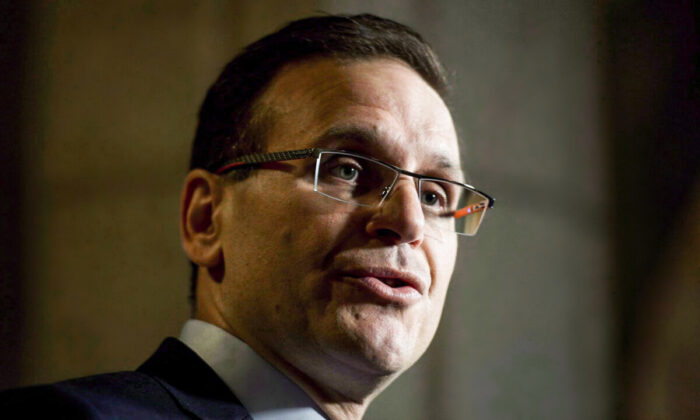 Senate Speaker Leo Housakos speaks with the media in the Foyer of the Senate on Parliament Hill in Ottawa, Tuesday, May 26, 2015. long-awaited audit of senators’ expenses being tabled today in the Senate is expected to trigger long-standing questions about the upper chamber and what it would take to implement wholesale changes ??? or abolish it altogether. THE CANADIAN PRESS/Adrian Wyld

The renewed aggression in Artsakh must be denounced in absolute terms, the Senator said in the Senate today.

“On March 24 Azerbaijani forces made various incursions into Artsakh territory, representing a gross violation of the trilateral ceasefire agreement of November 2020, which was intended to bring an end to hostilities. The attacks of 24th come just days after the disruption of gas pipeline, which runs through Azerbaijani-controlled territory, in a deliberate attempt to deprive hundreds of thousand of civilians of gas supply,” Senator Housakos said.

“Additionally, there ae reports that the Azerbaijani forces have been threatening residents of frontline villages with violence if they refuse to flee. Peaceful civilians are forced to abandon their homes and their indigenous lands. Women and children are being evacuated. Drones and artillery are being used to claim innocent lives and to engage in intimidation tactics meant to displace thousands of civilians, representing the worst escalation in the region since November 2020 ceasefire agreement,” he added.

He stressed that there is absolutely no doubt who the aggressor is here. “These continuous attacks should be called out for what they truly are – blatant war crimes and brutal violation of international law. It is our responsibility as Canadians, as defenders of democracy and as holders of rule of law, to be unequivocal in our condemnation of these aggressions an to denounce the crimes against humanity, which we are witnessing right before our eyes,” he stated.